The term “epigenetics” entered the biological lexicon in the 1950s when the British geneticist and developmental biologist, Conrad Waddington, coined the term “epigenetic landscape” as an aid to conceptualising how the process of development from a singe fused egg and sperm, called the zygote, reliably in most cases, evolved into an adult organism despite numerous environmentally sourced stresses. He envisaged a convoluted surface down which a ball could roll, its path representing the development process. From the figure below, taken from Slack (2002), it can be seen that Waddington envisaged links between the epigenetic landscape and the underlying genes (the “posts” in the bottom part of the lower panel of the figure), these latter acting to “structure” the landscape. A year later, in 1958, the American geneticist David Nanney used the term in a subtly different context to explain how cells with identical genotypes (so genetically identical) could express different phenotypes. In its first use by Waddington the term was deployed to explain cell fate in the development process and by Nanney to explain how the genotype is interpreted as phenotype. These are certainly very much related issues but the distinction is not a trivial one in terms of using “thinking” as a research tool, a point with which Waddington would, I am sure, have agreed. 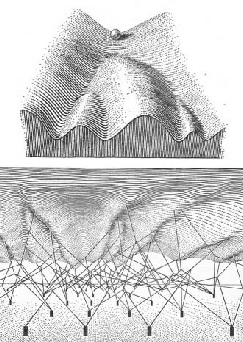 As the term is now predominantly interpreted, namely as the marking of chromatin and DNA with acetyl and methyl groups respectively, the meaning is quite different and it is instructive to explore in a little more detail this difference. Many would agree that this current use of the term is in fact a case of “high jacking” because there is no real linguistic justification for its use in that context. Marking is an example of epigenetics, one of a number of epigenetic processes; linguistically the term can be decoded as “above or over genetics” (Waddington’s interpretation is rather literal) so any process that over-rides genetic information falls inside the definition.

If we consider the context that Nanney used the term in, the possibility of a single genotype producing more than one phenotype, in terms of causality we should make an Aristotelian distinction between two causal categories, namely, the material and the efficient and recognise that they are independent one of the other. With regard to phenotype the material cause is the structure (sequence) of the DNA and the efficient cause is the way in which that sequence is used: the former is substance and the latter process and one does not and cannot, substitute for the other. I suspect that one reason why the more usual definition of the term epigenetics has shifted from being in David Nanney’s terms essentially process and in marking terms essentially substance, is that it is much easier to think in terms of substance than process.

To take an example to illustrate this point, consider the causes of soldiers marching in time to a drum beat. The drum is the material cause and the rhythm or beat with which the drum sounds is the efficient cause. If the soldiers march out of time there is little point in investigating the quality of the drum skin. Another example I have used in the past is the cause of Shakespeare’s literary genius (if indeed he is the authors of plays under his name). We can learn nothing about this by chemically analysing the ink he used to write the plays.

There is, of course, a process component to the consequences of chromatin marking but it entails the information that determines the marking pattern. Presently, research in this field is about how such marks are inscribed (e.g. what methyl transferase is deployed) rather than what directs the positioning of the methyl group in the coding sequence. That is, what ink was Shakespeare using rather than what words was he placing on the parchment when he wrote “To be or not to be …..”. Nanney was referring to the process that determined which of the gene coding sequences in the genotype would be used to give rise to a specific phenotype. The identity of the information that guides that process is the big question for epigenetic research.

Mauno Rönkkö and I, have made a clear proposal for the origin of this information in terms of rules governing the interactions of gene products (mainly proteins) in the cell. Such rules fall clearly into the category of efficient cause. This proposal, however, represents a significant departure from the prevailing paradigm which sees the DNA sequence (the material cause) as central to the interpretation of genotype to phenotype. However, the prevailing evidence is that this information derives at what is called the post-translational stage of gene product expression, that is, after the transcription and translational processes and, thus, not directly susceptible to influence by DNA sequence coding.

So the question arises: is the chromatin marking a consequence of processes driven by, for example, the interactions between gene products as Rönkkö and I have proposed, or is there some other source of information that informs the placing of marks and if so what is that? This is the key question that the marking community must answer.